Ever since we revealed our first promotional photo for Edwaard Liang’s ALICE, the response has been clear: Tell us more about these costumes!

And it’s no wonder. The costumes are exceptional.

They are the brainchild of Liz Vandal, a Montreal-based designer who’s most known for her work with Cirque du Soleil. She originally created these costumes in 2011 for a Washington Ballet production.

Erin Rollins, BalletMet’s costume shop manager, said it’s clear Vandal was given creative freedom and permission to dream big. The costumes are unique, not only in their appearance but also in their construction.

The costumes have so many fun optical illusions and subtle features that aren’t what they appear to be from a distance. (How fitting for ALICE, right?) Here are a few to watch out for when you come see us on stage.

There are 530 total costume pieces.

Each character’s costume is made up of an average of four different parts. (White Rabbit wears a total of seven pieces!)

The fabrics were custom printed in Montreal using a process called sublimation.

Sublimation is relatively new to the fabric realm, though it’s often used to print things on merchandise. The ink goes into a gas state and fuses with the plastic fibers in the fabric. The result is almost textural. Using this method, Vandal was able to get really creative.

The Queen of Hearts has the most complicated costume.

It’s made up of a unitard with three different types of printed fabric and foam pieces with hearts and bejeweling. She has a tutu skirt with boning, bejeweling and more foam, as well as a matching collar built with boning and dramatic angles. Queen wears a wig made from horsehair, with curlicues and a pompadour shape, and dyed pointe shoes. The final product is stunning and incredibly complex.

Tweedledee and Tweedledum say “tweedle” over and over again on every single part of the costume.

From far away, the repetition looks almost like stripes.

The costumes were also created using a process called Mytex, where a metallic foil is glued to the surface after it’s printed.

Rollins said it almost looks like vinyl, but it goes on in tiny dots so you don’t lose stretch (very important for dancers). The Mytex effect is featured on our caterpillar, roses and Queen of Hearts costumes, as well as others. 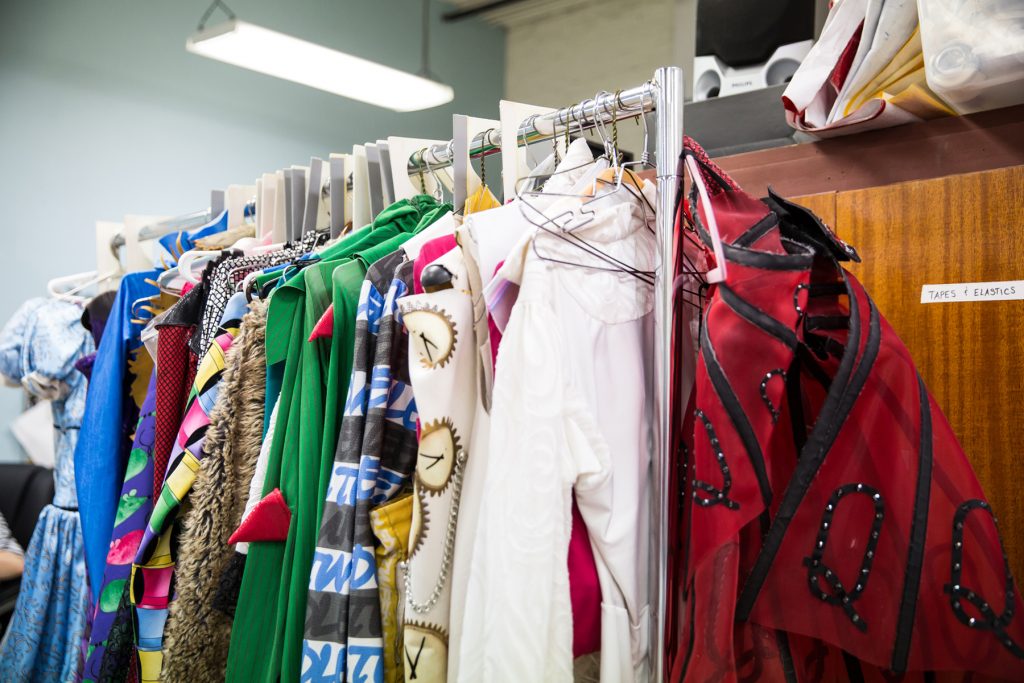 Vandal also plays a bit with body shape in the costuming.

A lot of shoulders are distended. There are dramatic points and headpieces that are larger than life—perfect for such a fanciful production. “It’s definitely in that way very unique amongst the costumes I’ve worked with here,” Rollins said.

Caterpillar has 8-inch fringe going down its legs and images of butterflies printed on foam and cut out all over the body.

The fabric on the playing card costumes has a red and green rose pattern that looks like an old fashioned deck of cards.

The front is a panel with the card’s suit, and the back is almost a wallpaper pattern. Rollins said the fabric is especially rich and beautiful.

Ready to see the costumes up close? ALICE will be on stage throughout Valentine’s weekend. Find your seat here.