Beautiful repetition, turn after turn, pose after pose – all in pursuit of the best performance possible. It’s what crunch time looks like for BalletMet. It is the season of The Nutcracker and the curtain goes up Friday when the Columbus company takes the show to Detroit.

BalletMet dancer Courtney Muscroft thinks of taking their performance on the road as exporting culture. “We’re taking it from here and putting it there. I think it’s very exciting for everybody.” Especially the 81 young dancers from Michigan, who’ve been practicing to join BalletMet for the Christmas tradition on stage in the Motor City.

“Here in Detroit, we don’t have a professional ballet company,” explains dancer Erika Ranck. “So without one coming in, we wouldn’t be able to dance for as many people or dance with a live orchestra or even just be in The Nutcracker at all.” 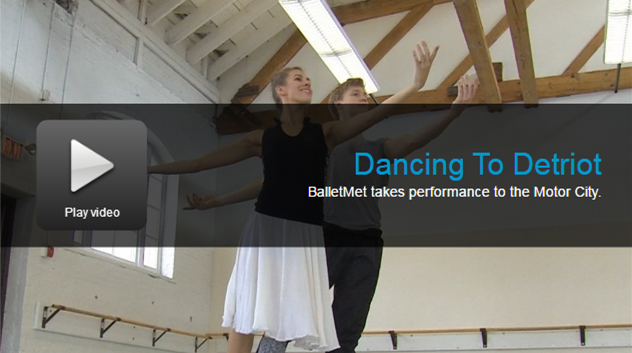 BalletMet’s artistic director says it costs cash-strapped Detroit a lot less money to pay them than to retain its own company. He and his dancers are more than happy to fill the artistic void. “Our job, if we’ve done our job correctly — which we do — is that we can touch, move and inspire the audience,” says Edwaard Liang.

Who knows what child might want to try ballet as a result or what child dancing with them might climb the ladder to join their ranks someday?

BalletMet has five performances in Detroit, one more than last year. They will then return to Columbus for local shows. The Nutcracker opens in Columbus at the Ohio Theater on December 12. Tickets are available through Ticketmaster or at Kroger.