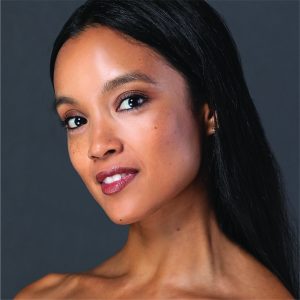 Erica was born in Tucson, Arizona, and began her dance training at Ballet Arts in Tucson, under the direction of Mary Beth Cabana, where she attended many prestigious summer intensives. After graduating from high school, she joined Ballet Tucson and worked closely with ballet masters Amanda McKerrow and John Gardner from American Ballet Theater, where they selected Alvarado to perform leading roles in many Antony Tudor ballets. Two years later, she joined the Milwaukee Ballet II program, and in 2011, joined City Ballet of San Diego as a principal dancer. At City Ballet, she performed principal roles in The Firebird, Carmen, Giselle, Don Quixote, Romeo and Juliet, as well as principal roles in such George Balanchine works as Square Dance, Who Cares, La Source, Donizetti Variations, Allegro Brillante, Serenade, Tarantella, Walpurgisnacht, Concerto Barocco, Apollo and Tschaikovsky Pas de Deux. Alvarado performed soloist roles in The Four Temperaments and Agon. She also danced the role of the Principal Woman in Peter Martin’s Hallelujah Junction. In 2017, Alvarado joined Atlanta Ballet where she has performed Kitri, The Sugar Plum Fairy, The Snow Queen, and other leading roles in Helgi Tómasson’s 7 for Eight, Stanton Welch’s Tu Tu and More, Craig Davidson’s Remembrance Hereafter, Liam Scarlett’s Vespertine, and in Scarlett’s world premiere of Catch. Alvarado has been teaching students and professionals of all ages since 2011.

We asked her a few questions…

What is your favorite thing about being a dancer?
I love experiencing the progression from studio to stages and then being able to break free come performance time.

Tell us your favorite food or meal.
I love a fresh and delicious pastry!

What artists/songs are on your top Spotify playlist?
It’s quite a mix, but lately I’ve been listening to a lot of Jason Mraz.

What is your favorite ballet to watch or perform? Why?
Anything Balanchine! But Romeo and Juliet has a special place in my heart. My husband proposed to me on stage during the curtain calls, plus the score to that ballet is mesmerizing!

If you weren’t a dancer, what would you be doing?
A Veterinarian!!!

What’s something that most people don’t know about you?
I’m the messiest toothbrusher!

We welcome Erica to Columbus and are very excited to watch her dance this season!