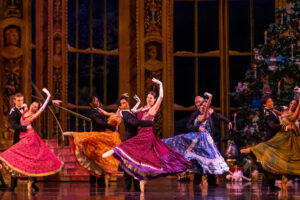 Another Nutcracker season has come and gone. Gerard Charles’ 2004 The Nutcracker continued to delight our community and our artists throughout the month. Many families returned as part of their yearly tradition—a position that we at BalletMet are grateful to occupy—and multiple generations came to the shows, with grandparents accompanying new parents carrying a little one into the theatre for their very first Nutcracker. Academy parents were finally rewarded for their endless task of driving children to and from rehearsals in Columbus rush hour traffic with the sight of their student onstage, marching around in the Party Scene or beaming among Mother Ginger’s pack of children.

We are especially grateful to all who stepped in towards the end of the month, when temperatures plummeted and roads became questionable. Thank you to a former BalletMet community member who, upon noticing the missing Nutcracker mascot that usually patrols the theater sidewalk, volunteered to don the costume for the night. Thank you to the hardworking members of CAPA who neatened up the sleigh’s fake snow drifts in the Patron Lounge after children had had their fun with it each night. Thank you to the dancers and students who braved the conditions to put on the last few shows with smiles on their faces. Thank you to our parent volunteers, helping us in all their roles throughout our most chaotic time of year. And, of course, thank you to our audience, who showed up in glittering dresses and ripped jeans and festive sweaters and yoga pants, despite the snow, despite the cold, despite the stress of the holiday season. We at BalletMet hope that each and every one of you had a magical experience at this year’s Nutcracker.

It is hard to believe that we are already halfway through the 2022-2023 season. The company returns in the new year with our last three productions of the season: Dorothy and the Prince of Oz, A Celebration of New Works, and Swan Lake. We can’t wait to see you there. 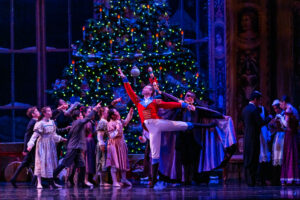